The frail figure clutching a blanket around him emerged from the house blinking, and crept towards me. A pink face surmounted by sparse grey hair looked like a deflated balloon. He held something delicately in his right hand, cupping it.

I’d driven across the Tramuntuna mountain range in north-eastern Majorca, from Fornalutx, where I lived, to Pollensa, where Spike Milligan and his wife Sheila often summered. He had described C’an Tatoli, where I was now standing by the pool, as a  “paradise of silence…..”

Not the night before. There had been one of those storms that sweeps in from the north, across the Mediterranean, knocking over pine trees and ripping terracotta tiles from rooves. The wind that accompanies such a storm shares the name of the mountain range, tramuntana. As I  point out later, all the winds that  shriek across the island are named.

So violent had been the wind and the storm that before I left that morning, the friend who had brokered  this interview with Spike, Pauline Scudamore, his biographer, rang to tell me to expect that he might not be up to seeing me. The storm had disturbed his sleep and he was extremely fragile. He was, after all,  71 years old and had suffered, since the second world war, from manic depression.

Pauline met me when I arrived and asked me to wait by the pool, which I did, for quite some time, with increasing trepidation. If he decided he was too frail, I would have to drive back across the mountains, without my story and worse, without having met my hero. The irony of meeting the creator of the quintessentially English characters, Eccles, Moriarty, Min and Henry, Bluebottle  and Major Bloodnok on an island in the Mediterranean had not been lost on me. 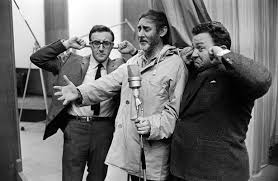 I’d first heard The Goon Show at the age of eleven,  in the old Double Bay Sailing Club, a ramshackle boatshed on Double Bay beach. After the Sunday race, we’d huddle around the steam radio, still in our wet sailing clothes and laugh maniacally at the surreal idiocy of the Goon Show. I still love it, but then, in the anodyne age of Menzies, it was a whack across the cerebellum, it seemed, somehow, subversive to be listening. Later, I bracketed Milligan with Charlie Parker as the two who broke the mould after that war that wreaked so much havoc on the world and on Terence Alan Patrick Seán Milligan KBE.

He held out the cupped right hand and said something to me in so soft a voice that I had to lean forward and ask him to repeat it. “I saved it” he said and opened his hand. In it was a beetle, dripping wet but still  moving. “It was in the pool and would have drowned, but I scooped it up and saved it”. He crept over to the garden, laid it gently in a flower plot, and turned back to me. “Would you like a cup of tea?”

We went on to talk for three hours, three of the most exhilarating hours of my life. I’d been warned, by Pauline, not to ask him  about the Goon Show – but you could no sooner meet Milligan and not talk about the Goon Show than meet Nixon and not talk about Watergate or  John Cleese and not mention Fawlty Towers. Talk about the environment, she said, and indeed, that was how we started – but we ended with the Goons.

During that three hours he transformed from a fragile deflated old man of  71 who looked like the next puff of wind might blow him over to a vigorous artist in full flight, in full control of his comic genius. It was as if he had been pumped, with a bicycle pump, full of life again.

I think it was partly because I was Australian. “My Mum lives in Woy Woy you know.” I did. He called it Woy –  a town twinned with Woy, and God’s Waiting Room. Yet he did much for Woy Woy, and they responded by naming a bridge that spans Woy Woy Bay Inlet the Spike Milligan Bridge – a decision that was the subject of a fight amongst the councillors which would have made Spike gleeful.

We went on to speak of over-population, the spread of mankind over the earth as ‘the human plague’, who was greener, Jesus or Buddha (Spike opted for Buddha), humour and, finally, I broached the topic of the Goons – at his suggestion.

He spoke of the genesis of Bluebottle. “… a boy scout. This tall thin chap turned up with a ginger beard and knobbly knees to see Sellers. He said (Bluebottle voice) Hello Mr Sellers, can you go out for tea. Sellers thought – I don’t believe this. And I met him afterwards. Eccles and Bluebottle became friends.”

And finally, I asked him what he would teach my two year old daughter about the world she’s growing up in. “Oh, only have one child. And tell her the reason for it. Give her a sense of the divine, a sense of beauty, a sense of love, a sense of wonder. Never hit her; otherwise she’ll think that violence is justice. And that wonderful free commodity love – bestow that upon her. And don’t smoke in front of her.”

Well we did have another child.  Shamefully, I did hit my first child (and the second one), but I also love them both dearly – and I did give up smoking. As for the divine, that, Spike, is hard to bestow.

One thought on “Meeting Milligan”

This site uses Akismet to reduce spam. Learn how your comment data is processed.

Tragedy and Comedy with a dash of cocoa

Perfecting the art of work-life balance through travel, retail therapy, and blogging.

MICHAEL SYMONS makes a diner's sense of the world

Wonder Of My Worlds

The Cookbook of Unknown Ladies

The Good, the Bad and the Italian

writes one short story every week